This is a new page suggested by Tim Younkin

“THE GOLDEN AGES”   by Tim Younkin

Chase High School has been in existence for over 100 years and has had some memorable athletic teams in that period of time. This paper deals with only the Boys’ sports and is an attempt to define “the Golden Age” of the three sports of Basketball, Track and Field and Football.

Following are my thoughts on “the Golden Age” of each of the aforementioned sports.

The Kansas State High School Activities Association (KSHSAA) came into being in 1910 as high schools started to become prevalent in Kansas.

By the mid 1920’s around 500 Kansas high schools were members of the KSHSAA.

All basketball championships were conducted in one class from 1912 to 1925.  In 1925 all high schools with enrollments of 200 or less were assigned a new division, Class B.

In the nine years that Chase competed in the Basketball Championships there were only two classes of Kansas High Schools and in 1929-30 there was only one championship.  Today, there are seven classifications that play for championships.

In 1927 Chase only registered 10 seniors and the three other classes totaled 53 students for a total student body of 63.

Chase went to Topeka and played at Washburn University in 1927.  In the first round Chase played Leonardville and won 21-7.

In the second round Chase was eliminated by Williamsburg by the score of 19-12.

1928 proved to be Chase High School’s best performance as it finished second in the Class B state championships held at Ottawa University.

Chase had a bye in the first round and then beat Stillwell 17-13 in the 2nd round.  In the quarterfinals Chase beat Brookville 24-13 making it to the finals.

The final game must have been a defensive oriented game as Chase met Haven.  Unfortunately Haven won by the score of 13-10.

Chase returned to the State Championships in 1929 that featured a return to one class to determine the state championship.  Class B teams played an elimination round and then joined the Class A teams to determine one state champion.  Obviously it placed the smaller high schools at a disadvantage and Chase lost in the first round played in Salina to Class A El Dorado by the score of 25-18.

In 1929 another feature was a consolation bracket and Chase won the next game by beating Class A Abilene by the score of 38-23.  In the semi-finals Class A Parsons prevailed over Chase in a close contest by the score of 15-13.

Chase did not make the 1930 State Championships that featured the same structure as the 1929 Championship that only crowned one state champion.

In 1931 the state returned to individual tournaments for both Class A and Class B. Chase again made it to the State Championships in 1931 and won its first round game 26-13 over St. Mary’s at Ft. Hays State.  In the Quarterfinals Cullison defeated Chase by the score of 24-17.

Chase’s last appearance in the Kansas State High School Basketball Championships occurred in 1935.  In the first round Chase was defeated by Baldwin by the score of 21-19.  Chase then beat Jamestown in the Consolation Bracket by the score of 33-29 but lost in the semi-finals to Riley by the score of 32-23.

Robert Schroeder finished third in the high jump in both 1927 and 1928 and Kennedy began the expertise in the broad jump shown by Chase athletes with a 3rd in 1929.

There was only one classification in these years so these Chase performances were against all high school track athletes in the entire state of Kansas.

But Chase really began its Golden Age of Track and Field in 1942 when the team placed 3rd in the Kansas Class B State Championships.

Jim Schroeder won the Broad Jump with a leap of 23’ ¾”.  That jump may still be the Chase High School record.

Vaughn Holton finished 3rd in the shot put and 4th in the discus.  David Robinson had a 5th in the high jump and Dale Cannon finished 5th in the 100 yard dash.

In 1943 a Chase High junior by the name of Bill Wygle followed in Vaughn Holton’s footsteps by placing 5th in both the shot put and discus.  James Sharpe also finished 3rd in the discus as Chase athletes nailed two of the top 5 places in that event.

Jim Schroeder won another broad jump title for Chase with a leap of 20’ 7 ¾” for two state titles in a row.

The mile relay team finished 3rd and Chase actually scored more points in the 1943 State Championships than they did in the 1942 Championships but did not finish in the top three teams.

In 1944 Bill Wygle, now a senior, took the shot put title with a heave of 49’9” and posted a second place in the discus.

In 1945 the mile relay team took another 3rd place in the state meet and a 5th place in 1948 indicating Chase has a history of producing good quarter-milers.

There was a brief lapse in 1950 with no points scored in the State Championships but 1951 began another run for Chase High School.

Miller went on to star at Kansas State University and won the Big 7 indoor pole vault championship in 1955.

1954 produced the pinnacle of Chase High School Track and Field as the team finished 2nd in the Kansas State Championships.

Johnny O’Hara nearly won the Class B state championship by himself with three first places.

Johnny took the low hurdles with a 1st place time of 20.5 seconds.

Finally, Johnny won the high hurdles in a time of 15.2 seconds.

Johnny O’Hara only spent 46.1 seconds on the track in three events but produced 15 team points for CHS.  Those 15 points are the most ever scored by a Chase athlete in the state championships.

Truman Hoover could not duplicate his 1953 win in the broad jump but finished third contributing 3 points to CHS’ second place finish in the 1954 Kansas State High School Track and Field Championship.

Defining Chase High School’s “Golden Age” of football has more considerations given two distinct aspects of the game of football at Chase and in Kansas - playoffs and participants.

First, there is the period from 1919-1968, a 50-year period, in which state football playoffs were not conducted by the Kansas State High School Activities Association (KSHSAA).

The second aspect is that while most schools played 11-man football, including Chase, 6-man football was introduced in 1938 and played by a number of schools with small enrollments for nearly 20 years.  However the six man game evolved.

In 1956 8-man football was introduced and began to replace 6-man football and by 1960 there were 97 Kansas High Schools playing 8-man.

In the mid-80’s Chase converted from 11-man football to 8-man football and in 1986 Chase had its best finish in the state playoffs by finishing second in 8-Man Division II with a record of 9-3.

But before the state playoffs began in 1969 Chase High School had three undefeated teams of 11-man football.

The Chase football team of 1935 was undefeated.  That was also the last year CHS participated in the State Basketball Championships so there were obviously some very good athletes enrolled at the time.

However, to get recognized by the KSHSAA as having championship caliber teams, a high school had to have football teams that went undefeated for at least two consecutive years in the period 1919-1968.

In this 50-year period there were only 38 high schools that achieved going undefeated for at least two consecutive years.  Considering that around 400 Kansas high schools were playing some version of football (11 man, 8 man, 6 man) in that period of time, these 38 recognized schools represent less than 10 percent of the high schools playing football over fifty years.

Obviously it was a difficult task and is why the KSHSAA had the consecutive years requirement to be recognized as being an elite team.

Chase High School was one of the 38 schools that accomplished this powerhouse feat with back-to-back undefeated seasons in 1956 and 1957.

Chase High School had a record of 17-0 over these two years winning back-to-back Quivera League titles.  In the 17 victories Chase played three games against larger size Class A opponents winning two games against Sterling and one game against Nickerson.

The 1956 and 1957 seasons were the pinnacle of Chase High School football, and, given the recognition by the KSHSAA, these teams represent “the Golden Age” of the sport of football for the Chase Kats.

Just discovered something recently that is interesting and I did not know back in the 1960s for sure. In the spring of 1965 I played my last game at the college of Emporia. We got beat by Southwestern College in Winfield. Sam Beam scored over 25 points against us. Sam Beam and I guarded each other and he won. I did score 18 but not enough. Later my video business led to working at Southwestern college doing their Hall of Fame events. I learned more about Sam. After graduating from SW College he became a teacher and coach at Chase. I believe he was there only a year or two. He then went to Chaparral High in Ks. He lives in Utah now. Anyone remember his time at Chase. My first year out of college was teaching in Denver and then 4 years at Chase County. He was at Chase1971-73.  I played against him in 64 and 65.

Tim Younkin found this website you can check out,

The website is for the Kansas State High School Activities Association

One thing I want to note is on the Non Athlete tab, click Hall of Fame and check it out for someone we know.

I took one section and copied it here as it is buried deep. But go in and look around.

And now for some blast from the past photos!

I took these three photos with my phone from the 1925 yearbook so excuse the distortions. 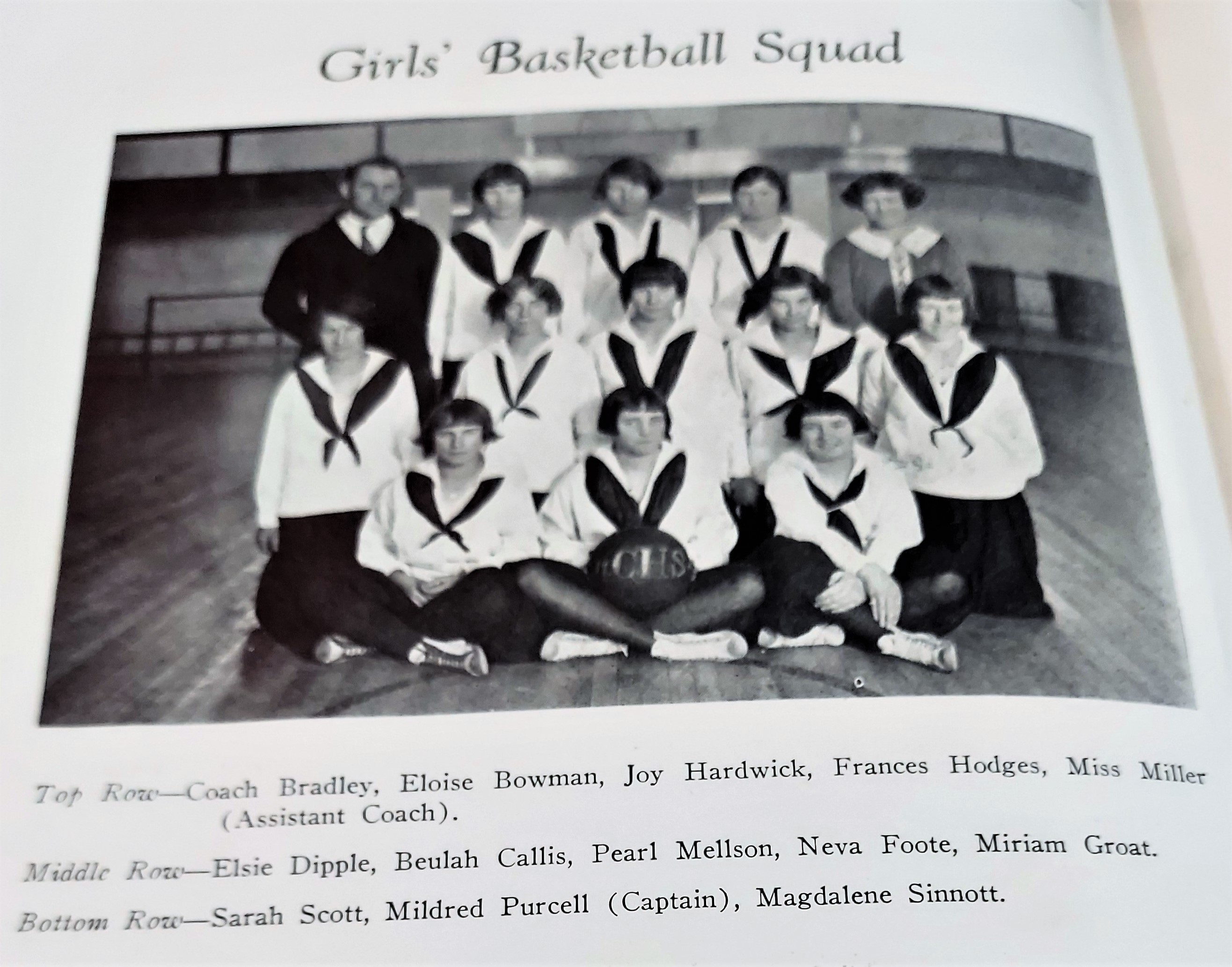 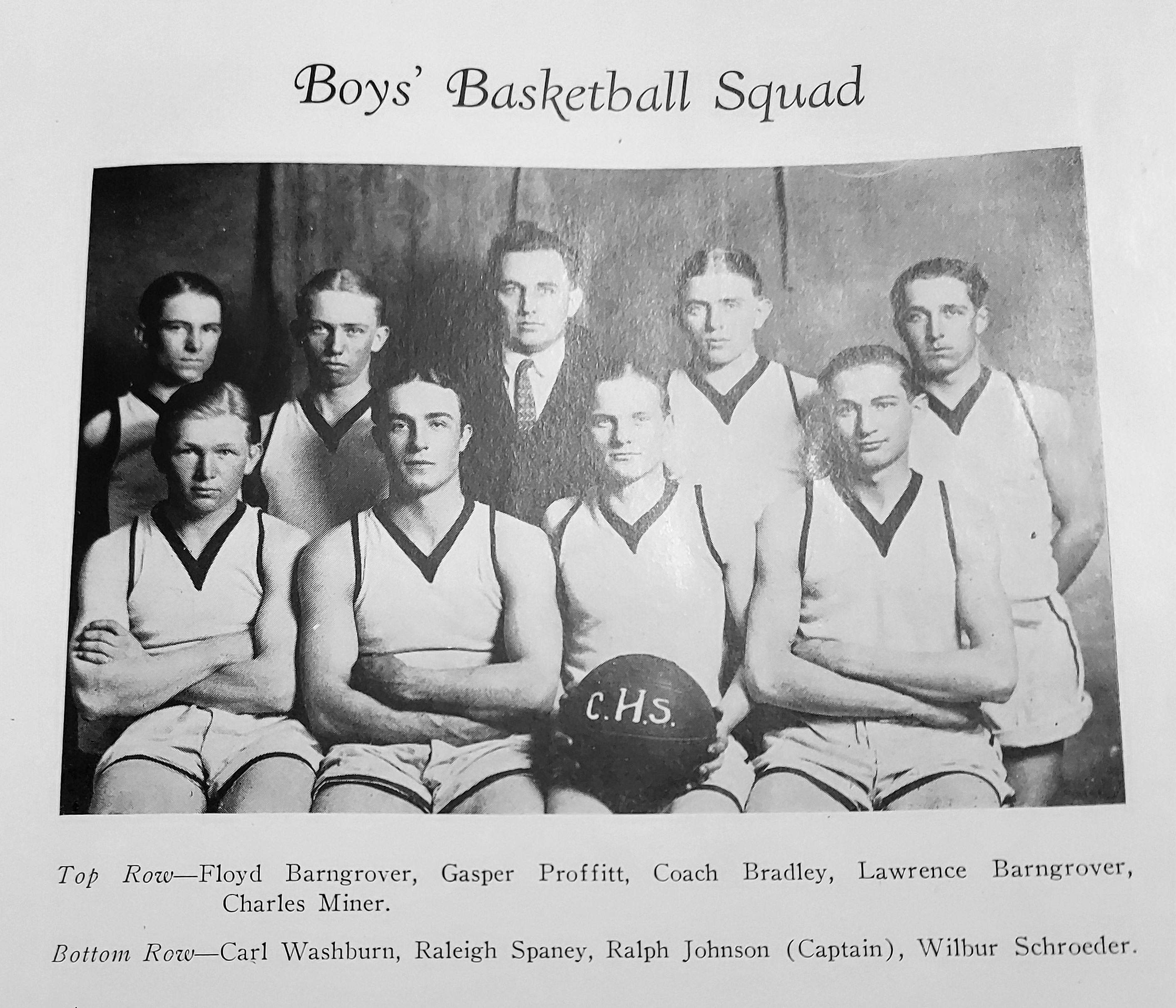 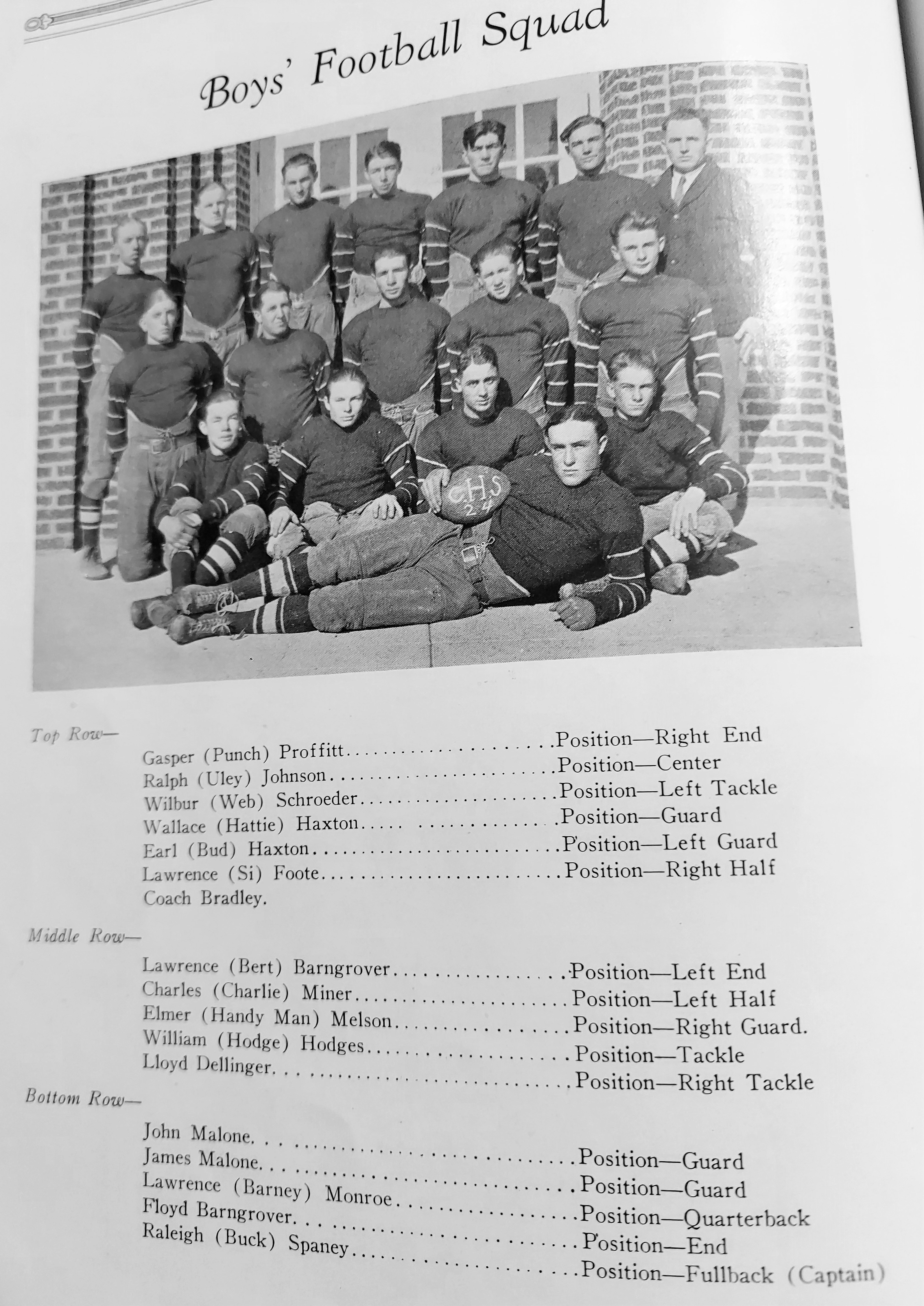 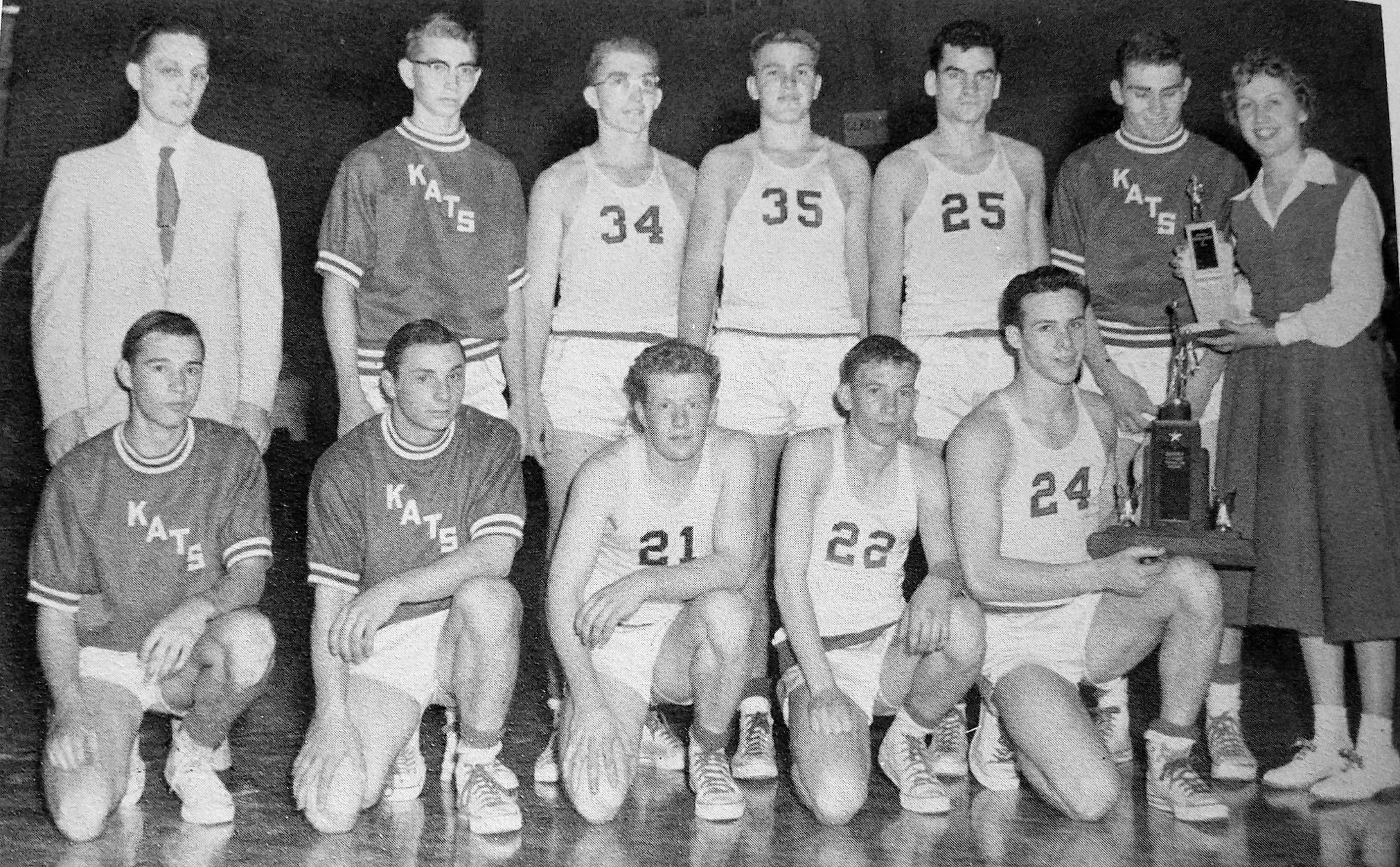 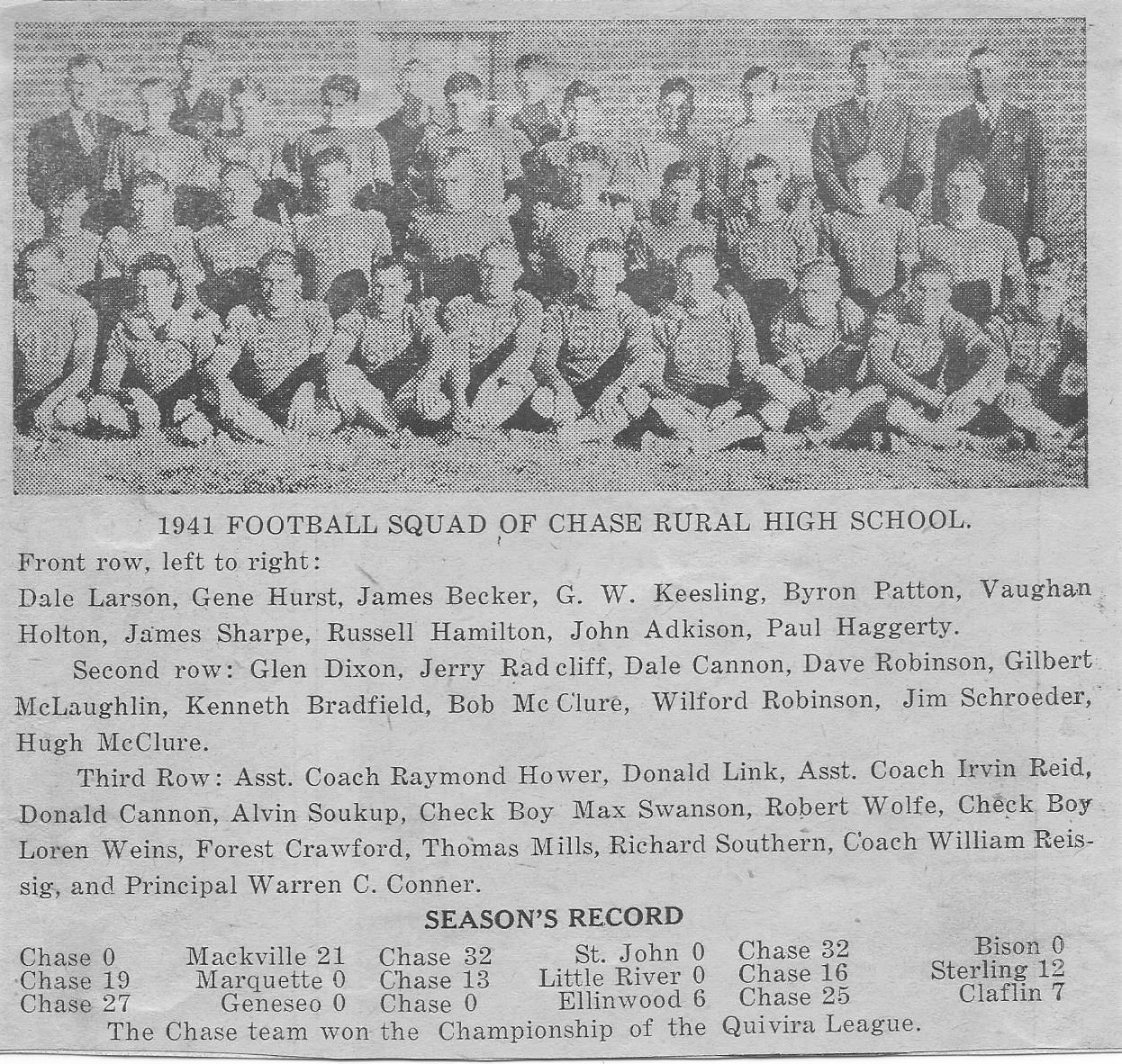 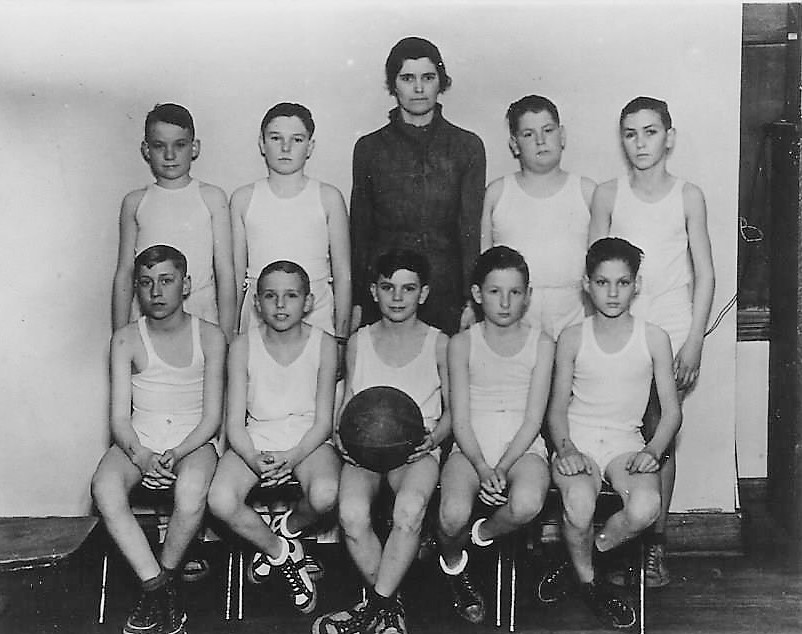 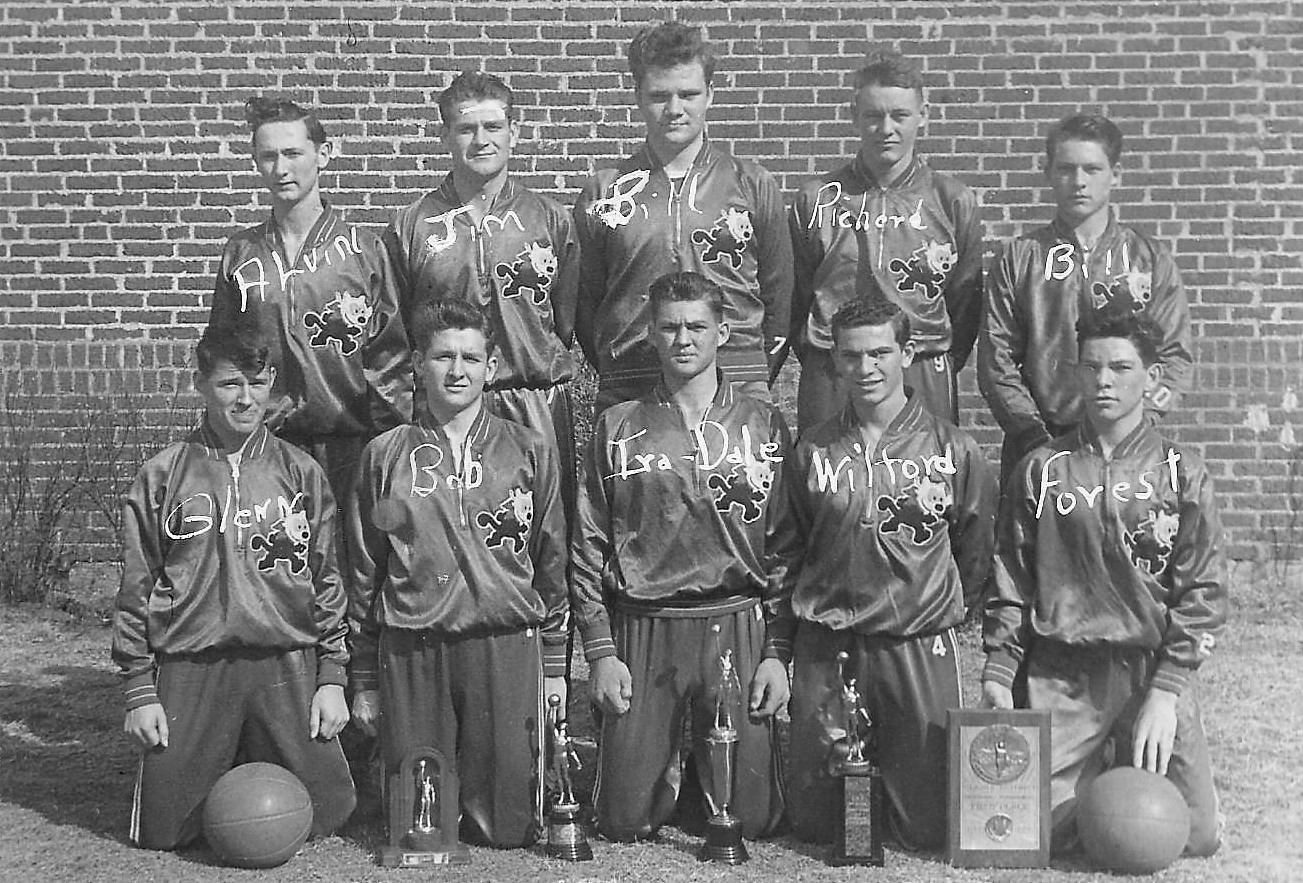 Anyone know full names?
Only ones I know for sure is Alvin Heine top left, Jim Sharpe next to him and Forest Crawford front row right. 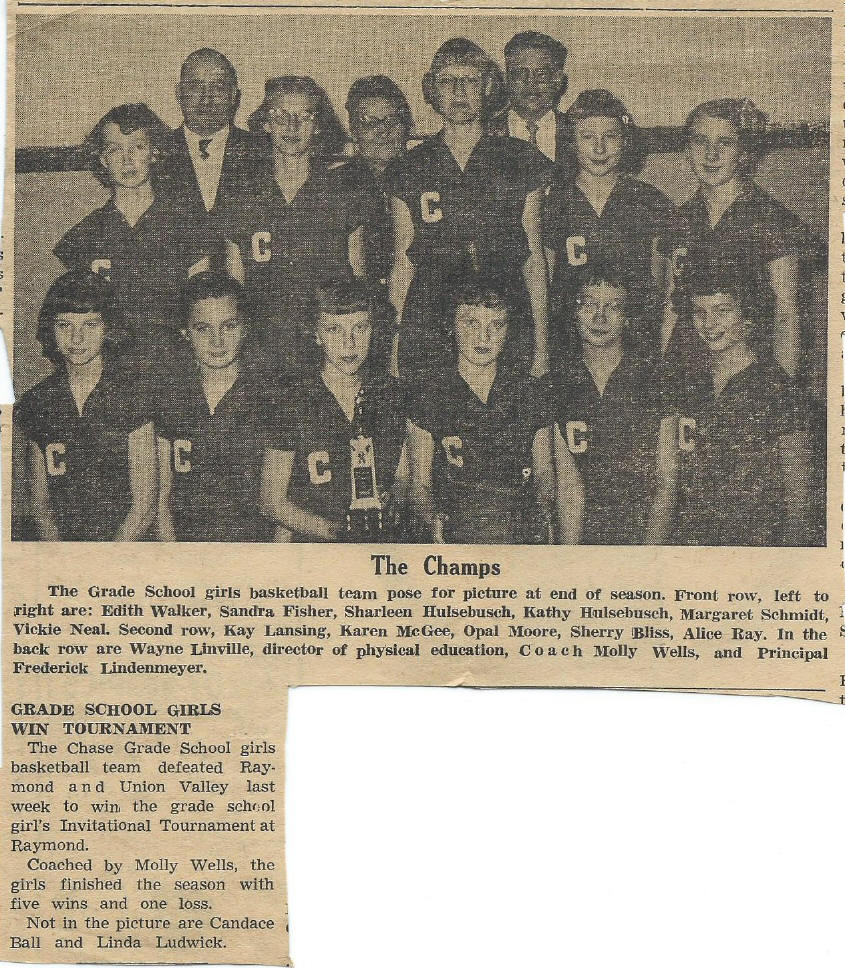 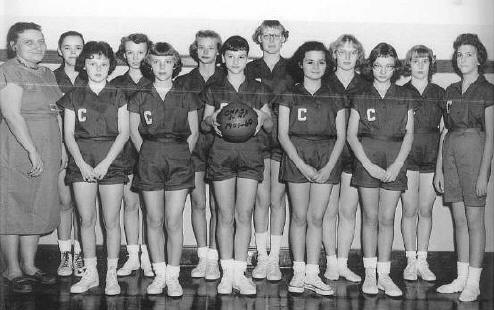 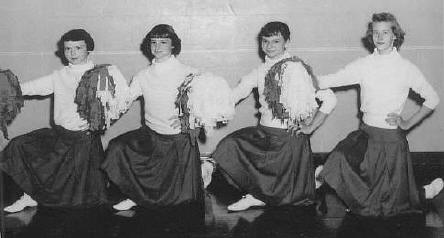 The 1929 CHS basketball team, shared with us by Dr. Eugene Wood: 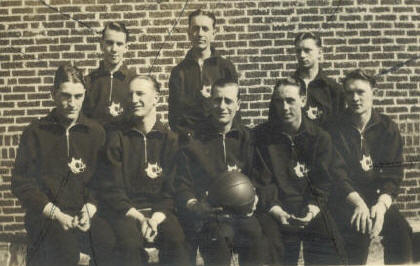 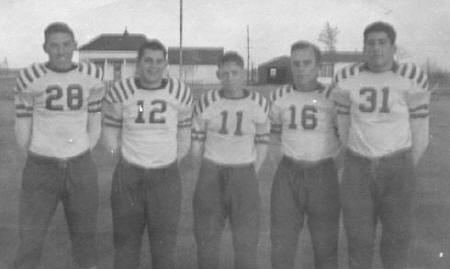 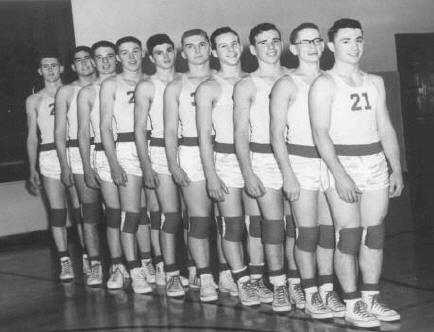 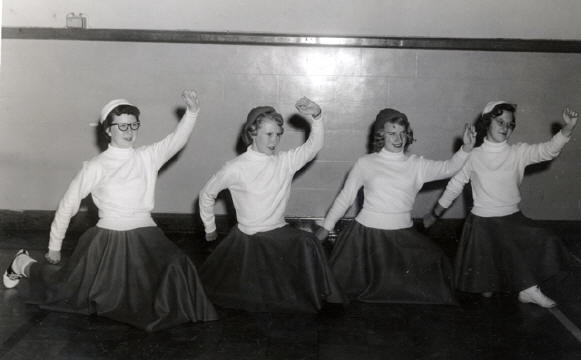 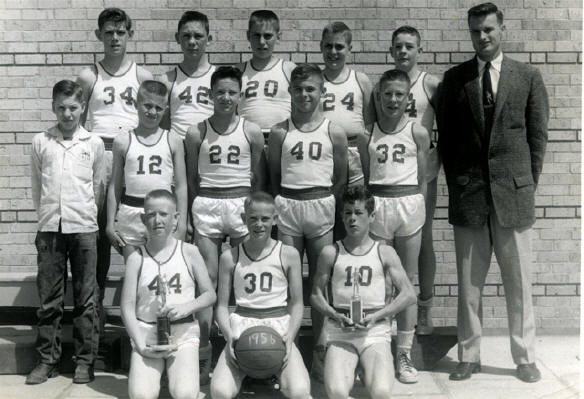 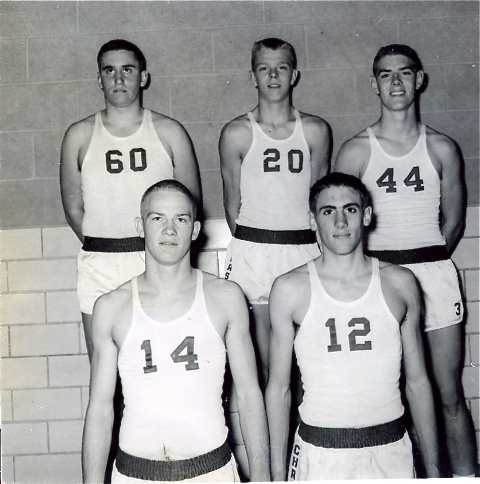 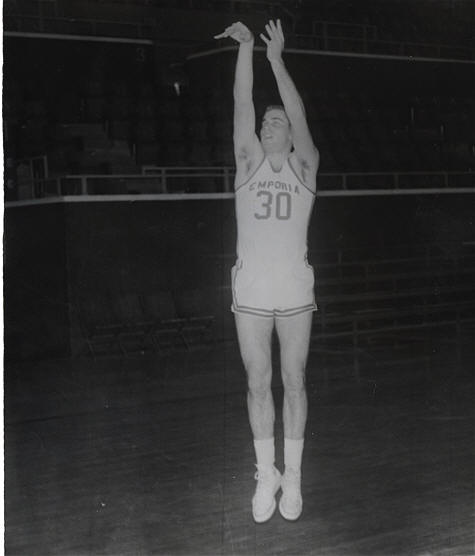 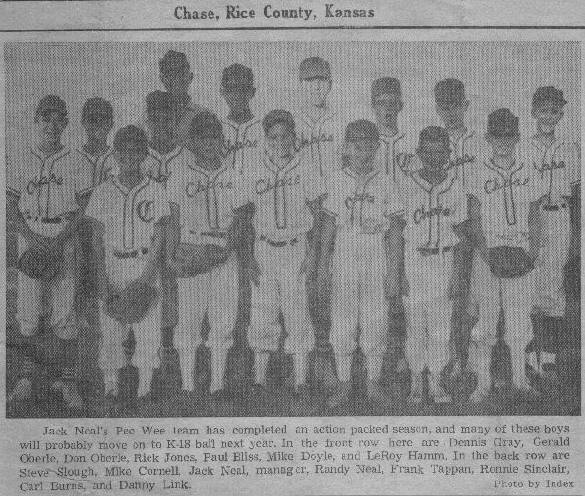 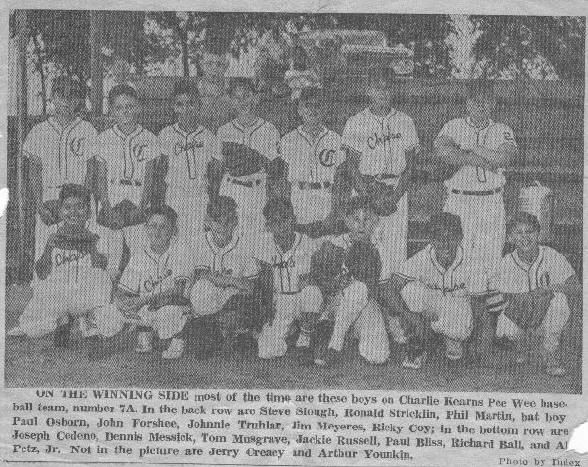 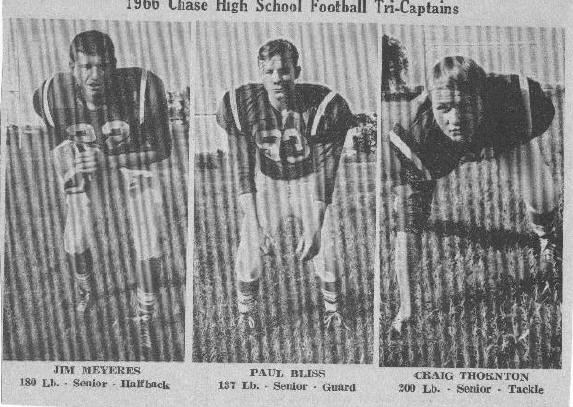 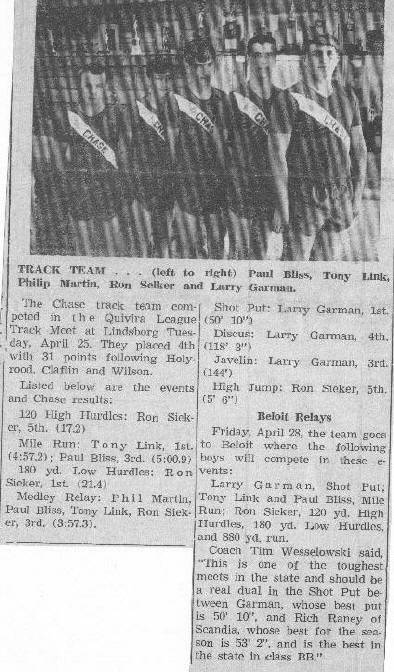 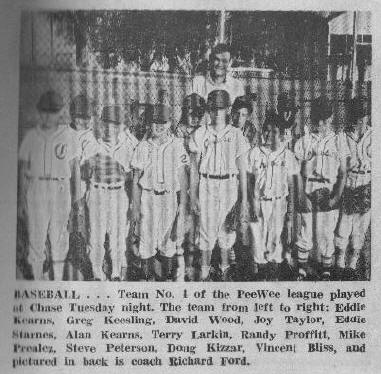 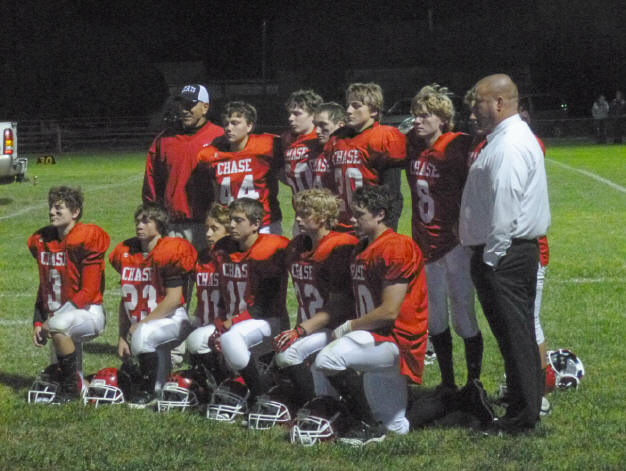 Game called by Burrton on account of an injury on their side.  Chase 42 Burrton 0

Back To Home Page