The following  link was provided by David Blevins, Class of 1965
This site allows you  to look up names of individuals or look at a state and
cities within that state and under each city will be the name of
those who died while serving.

Click on link below to view
When A Soldier Comes Home-----

As we endure our little hardships, it is sometimes good to put it into a better perspective.   Take the time out of your day to watch 5 minutes of true heroes...the people that put their lives and families on the line so that we can continue to have the lives and lifestyles we enjoy.
Click on link--

Click on link below to view
A Tribute To Our Veterans

KATS IN THE MILITARY

REMEMBER THESE ALUMNI SERVICEMEN
AND THEIR FAMILIES IN YOUR PRAYERS!

IF YOU KNOW OF ANY OTHER ALUMNI OR ALUMNI SPOUSES IN
THE SERVICE PLEASE LET US KNOW! IF YOU INCLUDE A PHOTO, WE WILL
POST IT ALSO. THANK YOU.

We would like to honor our Chase High servicemen and servicewomen. 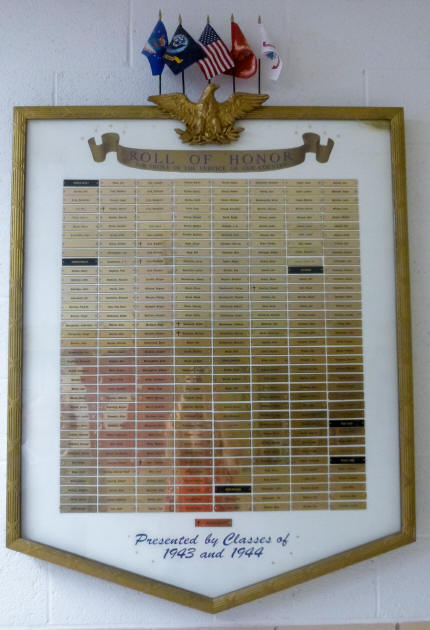 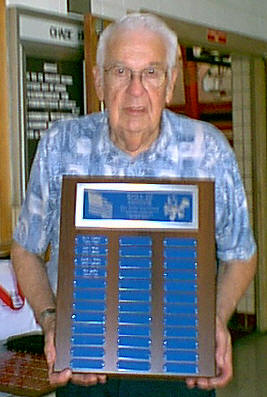 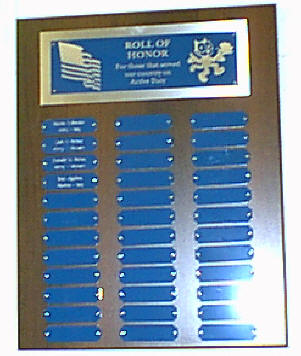 These names were taken off of the plaques hanging in Chase High School.
The big one with the gold plates and these with the blue plates.

Peace Time
All other dates served 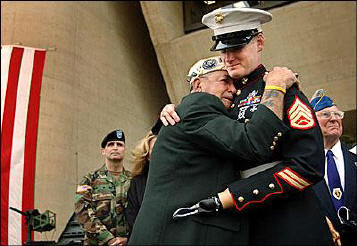 The occasion of this photograph was a
Veterans Day Commemoration at Dallas City Hall
on 2004. The veteran pictured
is Houston James, a survivor of the Japanese
attack on Pearl Harbor in and
the Marine is Mark , a
member of an ordnance-disposal team who
lost his left hand, one leg, and an eye while
defusing a bomb in Iraq in

This is a real picture, taken in Iraq on 2003
by the Baker Company, with the 7th Marines,
1st Battalion, to honor the victims of the terrorist attacks on According to
the Rock Hill, South Carolina, Herald:

Helmets atop rifles honored the day so many died.
Four U.S. Marines in Iraq held Old Glory a few feet
off the desert sand. Dozens of others stood around
them, spelling out a special message. The unit assembled
Tuesday in a formation of husbands and sons and helmets
and weapons that spelled out, "9-11: We Remember."

Andrew Schoenmaker, 25, is a graduate of the U.S.
Naval Academy and an executive officer of Baker
Company, with the 7th Marines, 1st Battalion.

Lt. Schoenmaker and his commanding officer bandied
about the idea for a picture to send home to the United
States signifying that the unit is still in Iraq, but the
pose ended up honoring the Sept. 11, 2001, victims.

"It is in remembrance of those that gave the
ultimate sacrifice on September 11, and
the reason that no matter how long we
are here, we will continue to push and never forget why
we serve," Andrew wrote in an e-mail to his father. 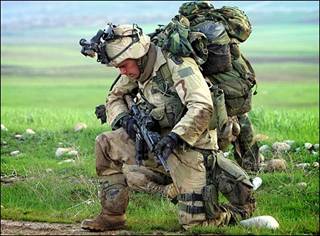 The soldier stood and faced God,
Which must always come to pass.
He hoped his shoes were shining,
Just as brightly as his brass.

"Step forward now, you soldier,
How shall I deal with you?
Have you always turned the other cheek?
To My Church have you been true?"

The soldier squared his shoulders and said,
"No, Lord, I guess I ain't.
Because those of us who carry guns,
Can't always be a saint.

I've had to work most Sundays,
And at times my talk was tough.
And sometimes I've been violent,
Because the world is awfully rough.

But, I never took a penny,
That wasn't mine to keep...
Though I worked a lot of overtime,
When the bills got just too steep.

And I never passed a cry for help,
Though at times I shook with fear.
And sometimes, God, forgive me,
I've wept unmanly tears.

I know I don't deserve a place,
Among the people here.
They never wanted me around,
Except to calm their fears.

If you've a place for me here, Lord,
It needn't be so grand.
I never expected or had too much,
But if you don't, I'll understand.

There was a silence all around the throne,
Where the saints had often trod.
As the soldier waited quietly,
For the judgment of his God. 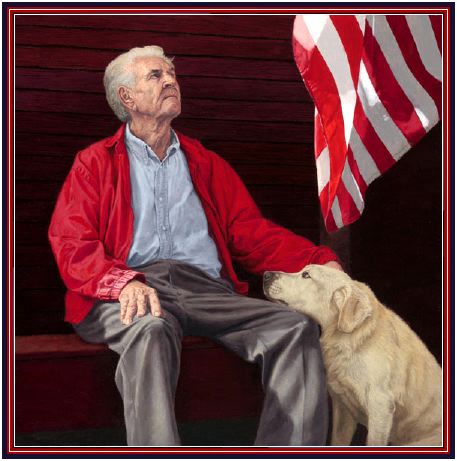 It is the VETERAN ,
who salutes the Flag, 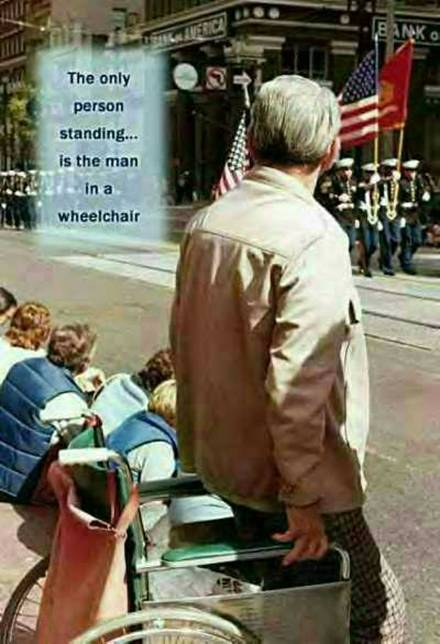 It is the veteran ,
who serves under the Flag, 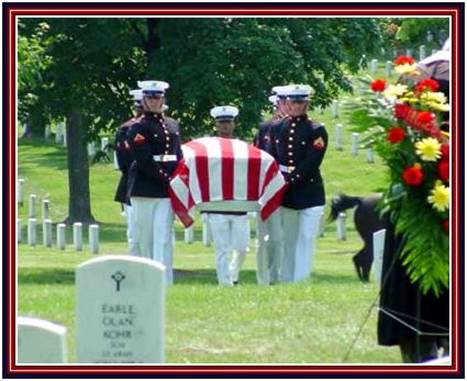 ETERNAL REST GRANT THEM O LORD, AND LET PERPETUAL LIGHT SHINE UPON THEM.

Thanks for sharing, Sherry Thornton Bass 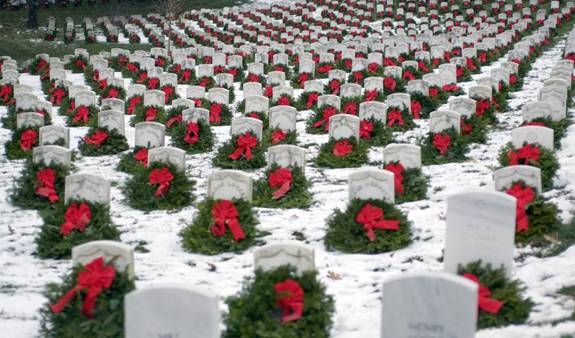 Know the line has held, your job is done.

Others have taken up where you fell, the line has held 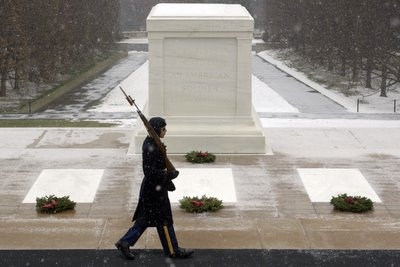 These wreaths -- some 5,000 -- are donated by the Worcester Wreath Co. Of Harrington, Maine. The owner, Merrill Worcester, not only provides the wreaths, but covers the trucking expense as well. He's done this since 1992. A wonderful guy.
Also, most years, groups of Maine school kids combine an educational trip to DC with this event to help out. Making this even more remarkable is the fact that Harrington is in one the poorest parts of the state.

From what you can see of the uniforms, this is a WWI era photo.
There is no date on the picture.  But what a gift from our grandfathers... 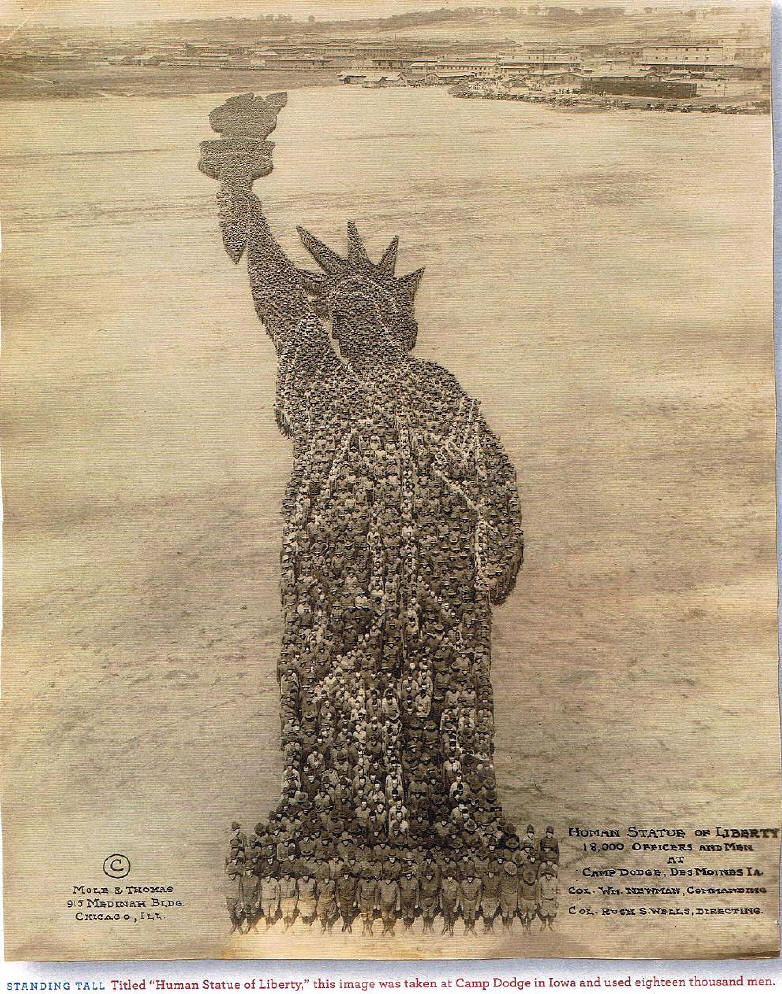